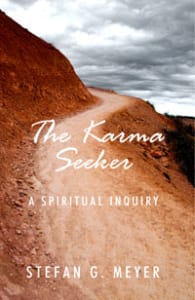 The Karma Seeker asks what is the true test of spirituality? Is it loyalty to a master, group, or teaching? Or is it having the courage to act on one’s deepest convictions, even in the face of disapproval and sanction? This is the question that confronts Kip Morgan. Kip is a karma seeker—an individual committed to testing himself by means of his own choices. For such people, who are engaged in an experiment with unknown forces, there is not way to prove that they are fit to discover what they seek except by doing it.

As a young man, Kip joins the League, one of the burgeoning new age spiritual groups of the late 1960s and early 1970s. He learns the fundamentals of its teachings, which involve cultivating inner experiences through contemplation, dreams, and out-of-body experiences. The high point of his experience comes with his initiation into the League’s inner circle, a transcendent event that significantly alters his view of life. It doesn’t take long, however, before he discovers how fragile this experience is, and how difficult it is to hold on to his new state of consciousness.

Kip embarks on a quest that takes him beyond the confines of the League. Eventually, he comes to question the group’s claim to exclusivity, and to see it as merely a portal to a universal spiritual path. As he becomes less reliant on the League and its members for support and guidance, he is torn between his personal vision of truth and his fear of spiritual failure. This puts him on a collision course with the League President, the group’s ultimate spiritual authority.

The Karma Seeker is a far-reaching guidebook to contemporary spirituality. It presents the reader with the essential paradigm of the modern spiritual path—its highs and lows, its rewards and pitfalls. It illustrates how individuals who embark on such a path are tested in the areas of their greatest deficiency in order to build up their spiritual strength, all so that they may eventually become active participants in their own destiny.

The Karma Seeker is available through Amazon as a Kindle e-book and Paperback.

The Crossing
Scroll to top